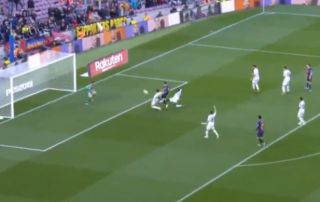 Lionel Messi scored a fine goal in Barcelona’s win over Getafe in La Liga today in what was a slightly tense atmosphere at the Nou Camp.

Barca were thrashed 4-0 by Liverpool in midweek to exit the Champions League at the semi-final stage, and some of their players were booed on the pitch today.

Still, Messi was able to shrug it off and get on the score sheet once again, with the Argentine now on 49 goals for the season in all competitions, with two more games to go for the club this term.

The Argentine has played a starring role in Barcelona winning La Liga once again, while he’ll also hope to add the Copa del Rey to his trophy cabinet.

That said, many will question Messi’s true long-term greatness if he cannot deliver another Champions League trophy before he hangs up his boots.