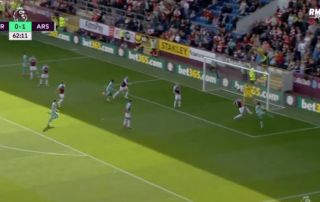 Pierre-Emerick Aubameyang scored a brilliant volley for Arsenal this afternoon to put them 2-0 up against Burnley at Turf Moor.

Having scored just minutes earlier, Aubameyang then bagged his second after a ball to the back post from Alex Iwobi saw him power home with a fine volley.

The goal now means that Aubameyang is level with Salah in the race for the Premier League Golden Boot with just under 15 minutes of time left to play.

Will Aubameyang do the unthinkable and take home the golden boot with a last-day hat-trick?

It would be quite the spectacle!