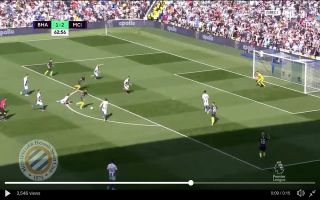 Riyad Mahrez has essentially won the league for Manchester City, the ace has scored a stunning solo goal to give City a 3-1 lead over Brighton.

In the 63rd minute of the tie Mahrez picked up the ball outside the box after exchanging some lovely passes with his teammates, the former Leicester star then showed off his silky footwork by sitting down Brighton defender Lewis Dunk with a perfectly timed piece of skill.

Mahrez then looked up and fired the ball into the top corner.

It’s only right that Mahrez’s goal seals the title for City, the Algerian was slammed after his penalty miss in this season’s draw against Liverpool. Fans believed that moment would stop City from winning the title, but Mahrez has made up for his woes today.

Pep Guardiola’s side have been fantastic this season and Mahrez’s goal shows that special bit of quality that has only just separated them from a very impressive Liverpool team.