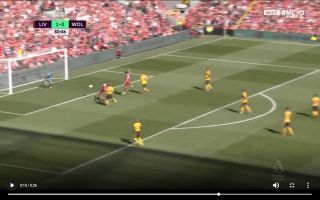 Sadio Mane extended Liverpool’s lead against Wolves in the 81st minute of today’s clash, the Senegalese star is now joint top-scorer in the Premier League.

England international Trent Alexander-Arnold whipped in a inch-perfect cross into the box and the ball just evaded Mohamed Salah, but Mane was on head to head the ball into the back of the net.

Alexander-Arnold’s assist has placed him into the Premier League history books, the 20-year-old has notched a record 12 assists for a defender this season.

Liverpool are extremely unlucky to fall short in this season’s title race, the Reds have finished the season with the highest ever amount of points for a second placed team.

Their tally this season would have secured them the league in so many other seasons.