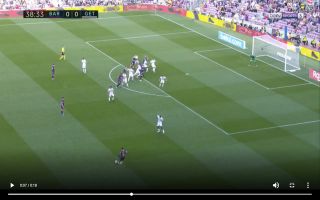 Barcelona have taken the lead against Getafe in the 39th minute of today’s La Liga clash, Getafe had a goal disallowed just over 10 minutes before Barca’s opener.

Messi launched an inch-perfect free-kick into the path of aerial threat Gerard Pique, but the Spaniard’s flick on towards goal was saved by Getafe’s goalkeeper.

The ball spilled out in front of the goal and Arturo Vidal hammered the ball into the back of the net.

Barcelona are in front! Arturo Vidal got on the end of a loose ball from a Lionel Messi free kick ?#LaLiga pic.twitter.com/vjSuAkQ8Rl

Whilst Barcelona have taken the lead, fans will be disappointed if Ernesto Valverde’s side don’t manage to win the clash by a bigger margin.

Barca need to deliver a powerful performance considering the fact that they were thrashed 4-0 by Liverpool on Tuesday night.