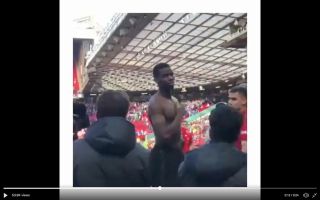 Some Manchester United fans aimed strong-worded verbal abuse towards Paul Pogba this afternoon, the incident occurred during the post-game lap of honour.

Manchester United superstar Paul Pogba was involved in an altercation with one of the club’s fans at Old Trafford this afternoon following United’s 2-0 defeat to Cardiff City.

The video shows one particular fan continuing to label the Frenchman as “f***ing s**te”, the fan also tells the midfielder to “f*** off”.

Whilst the star’s form has been disappointing recently, such foul-mouthed abuse seems a little uncalled for.

Here’s what these fans had to say towards Pogba:

Pogba was also involved in a verbal altercation with another set of fans from this same area of the stadium, those fans called for Ole Gunnar Solskjaer to sell the Frenchman.

Check that out here.

Today’s incident will only create more doubt over the star’s future at United.