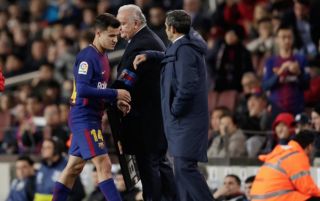 Barcelona left-back Jordi Alba was reportedly spotted trying to comfort and console Philippe Coutinho as the Nou Camp booed him against Getafe.

Barca endured a difficult week, losing 4-0 to Liverpool in the Champions League last Tuesday to be surprisingly dumped out of the competition in humiliating style.

While the Catalan giants may already have the La Liga title sewn up, their fans will be hungry for European success after no Champions League win since 2015, during which time their hated rivals Real Madrid have won the trophy three times.

Coutinho was a signing that would have been expected to help the club take that step forward, but he’s been a major disappointment so far.

According to AS, the Brazil international was the target of much of Barcelona fans’ wrath against Getafe, with Alba feeling the need to show his support to his team-mate in hostile conditions.

Philippe Coutinho has had a difficult time at Barcelona

This is rather reminiscent of the reception Paul Pogba got yesterday after Manchester United’s difficult season ended with another poor result, a 2-0 home defeat to relegated Cardiff City.