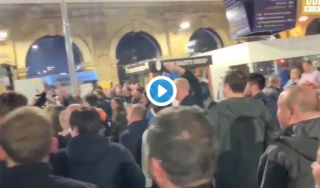 Everton may only have finished 8th in the Premier League this season, and a whole 43 points behind their Merseyside neighbours Liverpool, but that didn’t stop them enjoying yesterday’s finale to the title race.

The Reds were ultimately denied their first league title in 29 years yesterday as Manchester City won 4-1 at Brighton to finish just a point ahead of Jurgen Klopp’s men.

Everton fans arriving back home to clash with Liverpool fans at the station ??

I guess if you’re an Everton fan, that’s reason enough to have a bit of a party, with this lot above trolling some LFC supporters over their failed title bid in a clash at the train station.

This lot are in for a bit of a shock if Liverpool end up as European champions for the sixth time in three weeks.