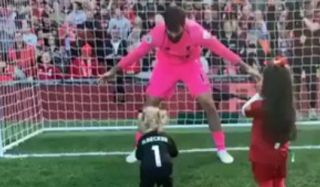 Liverpool goalkeeper Alisson shared a heartwarming moment on the Anfield pitch as he allowed his young daughter to score against him.

The Brazilian could not end his first season in England with the Premier League title as Liverpool’s 2-0 final-day win over Wolves was not enough to stop Manchester City lifting the trophy after beating Brighton 4-1.

alisson with his daughter is the cutest shit ive ever seen ??? pic.twitter.com/jh0FyTloEa

Still, Alisson has a Champions League final to look forward to and enjoyed this moment with his family after the win over Wolves.

Hopefully he’ll fare a bit better when Tottenham are taking shots against him in Madrid on June 1st!