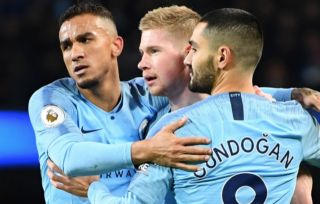 Ilkay Gundogan helped Man City to the Premier League title on Sunday and he showed his class off the pitch too with a wonderful message to rivals Liverpool.

The 28-year-old scored a brilliant free-kick in the 4-1 win over Brighton, with the victory enough to fend off Liverpool and keep City top of the Premier League table by just a point on the final day of the season.

That made it 14 consecutive victories for Pep Guardiola’s side to end the campaign, and so to show such consistency, quality and resilience to hold Liverpool’s title charge off ensures that it’s a fully deserved and hard-fought title for the defending champions.

As seen in his tweet below, Gundogan was keen to pay tribute to Liverpool for the fight that they put up, lauding them for the battle that they set up for the title after a hugely impressive season for Jurgen Klopp and his players.

Unfortunately for them, they came up against a brilliant City squad, who will hope to add the FA Cup to their collection this weekend when they face Watford at Wembley hoping to secure a domestic treble.

For Liverpool, there are so many positives to come out of this season, and so City will undoubtedly have to be prepared for another scrap next year as Klopp’s side will surely strengthen this summer and come again to try and knock the defending champions off the throne.

Amid all the celebrations and relief in Manchester though, it’s a really classy move from Gundogan to take time out and send a message to Liverpool to congratulate them on what has been a fantastic season for both clubs in question and for the neutrals watching such a fascinating title race.

Also big respect to @LFC for a fantastic season that is usually enough to deserve and get the league title. You've been a great opponent until the very last match day. It was an amazing title race! #EPL @premierleague