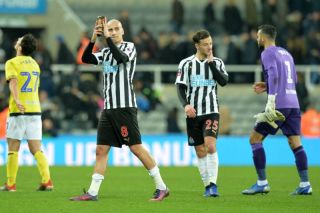 Jonjo Shelvey has revealed that he wanted to put on a display on Sunday, whether it was for Newcastle Utd’s benefit or not beyond this season.

Rafa Benitez’s side ended the Premier League campaign with a 4-0 win at Fulham, with Shelvey scoring the opening goal of the encounter.

That resulted in a 13th-placed finish in the table for the Magpies, who will want to build on that next season with the help of reinforcements this summer.

However, based on Shelvey’s comments below, it sounds as though he’s more than happy to leave the door open to a move away from St James’ Park, which would be arguably be a blow for Newcastle Utd despite his limited influence this year.

“I needed to put in a performance to get people talking back about me either at Newcastle – or away from Newcastle,” he is quoted as saying by the Chronicle Live. “At least I’ve finished with a good performance and a goal.

“I’ll enjoy the summer and see what the summer brings now. To be fair, I’m glad to see the back of this season.”

That’s not particularly reassuring from the 27-year-old in terms of being committed to Newcastle Utd, and it may be a blow for Benitez if he moves on and he isn’t able to bring in quality replacements, assuming that the Spaniard stays on himself with his current contract set to expire this summer.

Shelvey made 18 appearances this season, scoring two goals and providing an assist, as he struggled to entirely establish himself under Benitez having been dropped down the pecking order.