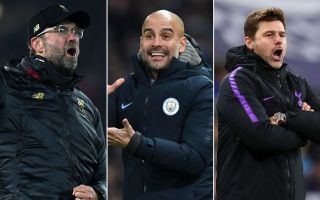 Manchester City are odds-on favourites to win the Premier League title for a third year in a row next season as Ladbrokes already release their prices for the 2019/20 campaign.

Unsurprisingly, Liverpool are close behind as second favourites, though Manchester United are rather generously put in as third favourites with these bookies.

This seems odd given the disastrous campaign Man Utd had, with things starting badly under Jose Mourinho and also ending miserably for Ole Gunnar Solskjaer as the club ended up in 6th – a whopping 32 points off champions City.

Meanwhile, Tottenham are unsurprisingly ahead of north London rivals Arsenal as that particular power shift continues.

It used to be that the Gunners would finish above Spurs every season, but it’s now been three years in a row that the red half of north London have had to settle for second best in that part of the city.

Alex Apati of Ladbrokes said: “The curtains may have only just closed on this campaign but attention has already turned to next season and it’s Pep’s men who’ll go off as odds-on favourites.”