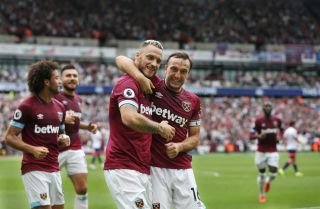 Mark Noble has again been a key figure for West Ham United this season, and Ian Wright was keen to praise him on Sunday.

The Hammers signed off the Premier League campaign with a 4-1 win over Watford at the weekend, moving them up into the top half of the table.

Given the arrival of Manuel Pellegrini and several new faces, it has to be considered a decent season overall, one that can serve as a building block to continue to climb the standings moving forward and make further progress.

One player who has been at the heart of that progress has been Noble, who has made 32 appearances this season, scoring five goals and providing five assists.

The influential captain was given specific praise from Wright on Sunday, as he was evidently impressed with the impact he had in the final third.

“Great touch from Mark Noble,” Wright said, as quoted by This is Futbol. “Mark Nobles’s skill from here is fantastic. He doesn’t get a lot of credit for this sort of stuff but that’s fantastic.”

In fairness to the BBC Sport pundit, he makes a valid point. Noble is well known for his tenacity and combative nature in the heart of the midfield, but his quality work in the final third is often overlooked as perhaps it’s not too consistent.

Nevertheless, having shown his class with two goals against Watford, the 32-year-old will undoubtedly be hoping to improve on his tally next season with Manuel Pellegrini’s side looking to build on this season and continue to improve.