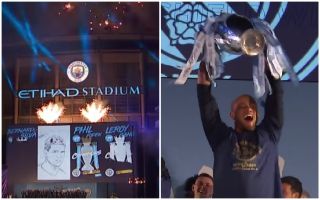 Man City wasted little time in getting back home to celebrate with their fans after securing the Premier League title on Sunday.

Pep Guardiola’s men sealed a 4-1 win over Brighton to fend off Liverpool and successfully defend their crown, with the celebrations having to take place at the Amex Stadium.

While the travelling Man City fans certainly had a day to remember, the squad and staff ensured that they could enjoy their achievement with many more of their supporters by returning to Manchester on Sunday night to continue the celebrations.

As seen in the video below, a special stage was set up outside the Etihad, with the squad parading the Premier League trophy along with a fireworks display and plenty of on-stage antics as City savoured the moment after what has been a thrilling title race this season.

Naturally, they will have enjoyed their success on Sunday, but Guardiola will undoubtedly be getting them focused once again in midweek as they prepare for the FA Cup final against Watford on Saturday.

For now though, having rattled off 14 consecutive wins to end the campaign to remain top of the pile, it’s certainly an achievement worth celebrating long into the night as City have had another remarkable year.

The Champions are here!