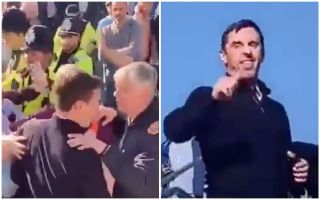 Sky Sports pundit and Man Utd legend Gary Neville made no secret of his desire to rather see Man City win the Premier League title over Liverpool this season.

While he would undoubtedly have preferred to not be in that position at all, he made it pretty clear that he was siding with Pep Guardiola’s side over bitter rivals Liverpool ending their long wait for a title.

Judging from the video below though, he may well have been re-thinking his decision as the clip seemingly shows him being showered with two drinks as he made his way to City’s game against Brighton at the Amex Stadium on Sunday.

Clearly far from impressed with the first drink that appears to hit him on the shoulder, Neville turns around and faces the City fans before expertly ducking a second one.

He’s then escorted up the stairs by a few sensible fans, who take him out of the firing line and towards the stadium to prepare for his day at work.

Given he had been quite vocal in backing Man City this season, he would of arguably expected a more positive reaction from the supporters, but clearly there is no love lost for some.

As seen in the tweets below, some Liverpool fans couldn’t help but mock Neville, as they were clearly savouring the moment after listening to him urge their title rivals on in what was a brilliant race this season.

Guardiola’s side eventually finished top of the pile, with their win at Brighton sealing back-to-back title triumphs, while it’s safe to say that Neville probably didn’t join in the celebrations after.

And he was supporting City all season ? pic.twitter.com/6blqCJEqDG

Brilliant. And Liverpool fans would have been unbearable eh Gary @GNev2

But it’s Liverpool fans who would be unbearable!

Lmao he actually supported city all season and that happened

@GNev2 Sorry to see that your new club behaved so disrespectful toward you today. I mean that behaviour is just really unnecessary? Hope you now understand that the blue half of Manchester hates you as much as the Red half of Liverpool. But you carry on City your bro’s #prick.

But weren’t the Liverpool fans mean’t to be the unbearable ones.

Yeahh well that’s what he deserves for being a biased pundit. I understand the United-Liverpool rivalry, but trying so hard this season to cheer for city was just immature and unnecessary. Do your job without a side for personal opinions and emotions

Can’t believe his second club would treat him so badly

He may stop his love affair with city now ? @whitey_carl

And you preferred City winning the title! @GNev2