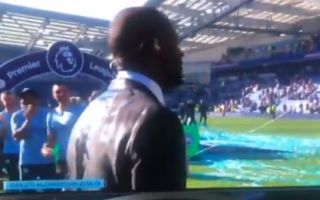 Former Manchester City star Yaya Toure got caught up in the team’s title celebrations yesterday as they beat Brighton 4-1 to lift the trophy for a second year in a row.

The 35-year-old was a Premier League champion himself with City last season, though he’s since left the club and is currently without a team, with there even being some talk that he’d retired, though he’s since been quoted by BBC Sport as denying this.

“Ah ya BASTARD” after being covered in booze by Leroy Sane ? pic.twitter.com/pgUvWJekbo

Whatever Toure’s up to, it was nice of the City players to let him get involved in their celebrations yesterday, even if it didn’t sound like he particularly enjoyed having champagne poured on him and his nice suit.

Bizarrely, however, he can be heard shouting ‘you bastard’ in what really sounds like a thick Scottish accent.

Others noticed this too, it would seem, and we’re not quite sure what happened to Toure’s voice in this moment…

Why does Yaya Toure all of a sudden sound like Glaswegian man shouting “aw ya bastart” when Sane pours champagne over him??#ManCity pic.twitter.com/RHLgGemJXU