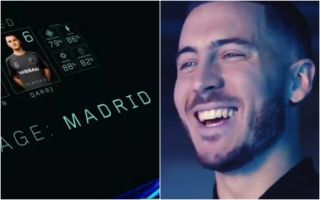 Chelsea forward Eden Hazard has starred in a Nissan advert in which the phrase ‘Next stage: Madrid’ appears on a screen.

The Belgium international has long been linked with a transfer to Real Madrid, and a recent report from L’Equipe claims he could be announced by the Spanish giants after the Europa League final on May 29th.

So it is perhaps unsurprising that some Chelsea fans have not taken too well to the possible clue in this advert in the video clip above.

Watch as Hazard and other footballers complete a set of drills and show off their skills before moving on to new levels.

One of those appears to be in Madrid, which could indeed be the next level up for Hazard’s career.

this was his announcement ‘next stage madrid’ 🙁

The last thing I saw was “next stage Madrid”. He’s really leaving??? https://t.co/C6TWB2aMgV