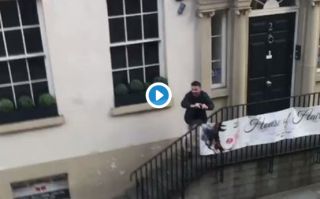 A video has emerged online that claims to show a Liverpool fan orchestrating a sing-along with fans all around an apartment block in Liverpool.

The Reds have just missed out on the Premier League title, with Manchester City finishing a point ahead of them on the final day of the season.

Liverpool on Monday morning ? “6am in Liverpool! An hour earlier this fella had been singing and ppl were opening windows telling him to stfu it’s early! An hour in and he is now orchestrating the whole apartment block in a sing song” ???? pic.twitter.com/9Kw8z14At2

Still, the mood appears to be good as LFC prepare to take on Tottenham in next month’s Champions League final.

Credit to this guy, who apparently woke up some people with his early-morning singing, before winning most of them over as they joined in the chants.

This kind of support is exactly what Jurgen Klopp’s side will need in Madrid on June 1st!