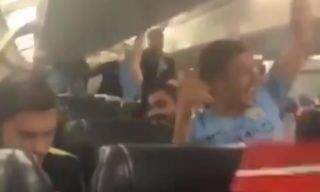 A video has emerged online appearing to show Manchester City players chanting their own version of the ‘Allez, allez’ Liverpool anthem.

This chant has done the rounds for some time now, mocking the Reds over their defeat to Real Madrid in last season’s Champions League final.

Watch the video above as a number of City players seem to join in the chant mocking their title rivals, referencing Sergio Ramos injuring Mohamed Salah in last season’s final in Kiev, and violence against LFC fans.

It seems to be mainly a few young players involved and it’s not clear how many of the senior stars sung along due to some blurry footage.

Still, some Liverpool fans have seen the video and are not at all happy with how City appear to have conducted themselves here…

Man City players appear to be singing a parody of 'Allez Allez Allez' after winning the league.

They sing about Liverpool fans being 'battered in the streets.' Distasteful, after Sean Cox almost died after being stabbed.

City players: Sing about salah being injured and Our fans being stabbed and put into a coma.

City players singing about Sean Cox, absolutely disgraceful. Of course it won't be mentioned by the media. https://t.co/RvIEWHYld2

“Battered in the streets”. Classy of City players to be singing about Seaon Cox! Disgraceful! #seancox #lfc #ManCity https://t.co/OKdIXoUyfm

So city win the league and all they can sing about is Liverpool, small club, the likes of Everton, villa, Sunderland etc are bigger than this bunch ?? https://t.co/5EKLy50nw8

A mans life was permanently affected by Roma fans after being "battered in the streets". Classy club https://t.co/cA4wjuYcfV

This is absolutely disgusting, City should be hauled up on this, I’d be disgusted if that was some idiot fans but that’s the players singing that https://t.co/ZfVatzcVK6