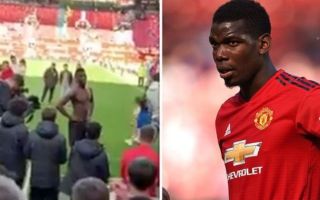 One of the Manchester United fans involved in an altercation with Paul Pogba after the Cardiff City game on Sunday has been in touch with CaughtOffside to explain why he told manager Ole Gunnar Solskjaer to ‘sort’ the Frenchman out.

On Sunday 12 May we published a piece that incorrectly claimed that the fan in the video clip below (in the glasses and a beige jacket), was shouting at Solskjaer to get Pogba out of the club.

We apologise to the fan for misrepresenting what he had said, and appreciate him getting in touch to clarify the situation and add more context to this short video clip that did the rounds on social media following United’s surprise 2-0 home defeat to Cardiff.

He claims several Man Utd fans moved towards the front of the stands in order to aim abuse at Pogba, whom he feels did not do enough to diffuse the situation.

The France international can clearly be seen standing with his hands on his hips and facing the angry supporters, with the fan describing his gestures as ‘antagonistic’.

He explains that he felt this was unprofessional behaviour, and tried to tell the nearby Solskjaer to ‘sort him out’ – and that he is not one to simply shout abusive messages at players.

“He (Pogba) was just antagonising fans with his unprofessional posturing and gestures, instead of just walking away,” the supporter told CaughtOffside.

“I have never, and will never shout abuse or anything else, regarding the footballing attitude or ability of a player.”

Pogba joined United from Juventus in 2016 but has frustrated fans and pundits alike with his inconsistency in his time at Old Trafford, with some talk that he could be on his way out of the club this summer.