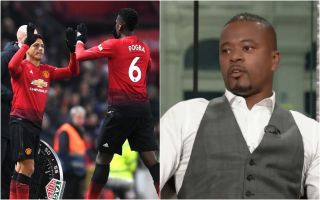 The Chile international notably made the surprise move from rivals Arsenal to Man Utd, despite it being widely known at the time that Manchester City were in for him and seemingly leading the race for his signature for some time.

MORE: Manchester United legend thinks Paul Pogba will leave after talking with him every day

Evra references City’s pursuit of Sanchez in his interview with Sky Sports, suggesting the player surely had no other motivation to snub a move to the Etihad Stadium in favour of Old Trafford other than money.

The former Gunners ace has gone on record as saying he was a fan of United as a kid, but Evra doesn’t seem to buy that as he slams the player and the club over the whole deal.

In a truly stinging attack, the Frenchman says the signing of Sanchez was a low point in United’s history.

“Some players only come for the money, I am not afraid to say that,” Evra said.

“I have nothing against him, but Sanchez, when I saw the deal, that’s when I thought the Manchester United history just went down.

“He had Manchester City, they were offering less money but he was going to play a better football than United – I’m sorry about that, but City play better football. (Pep) Guardiola will also improve him.

“So I want to know what is the real reason for choosing United? Don’t tell me he loved Manchester United when he was a kid. It’s either the money or he wanted to be the number one, take the No 7 shirt and be the star.”