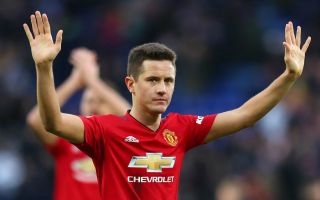 Manchester United midfielder Ander Herrera has fired a warning to the club and manager Ole Gunnar Solskjaer after playing his final game for the Red Devils.

The Spaniard is expected to leave on a free transfer for Paris Saint-Germain when his United contract expires this summer, as previously reported by the Daily Record.

This looks a big blow for the club, with Herrera an experienced and reliable performer in the middle of the park and not the kind of player you’d want to see to during what is likely to be a major rebuilding process anyway.

Herrera himself certainly seems to think tough times could be ahead for Man Utd, as he backs Solskjaer as the right man for the job, but also expresses his belief that it’s a very difficult one for the Norwegian tactician.

“I really believe in Ole,” Herrera is quoted by the Telegraph.

“I really believe in [his coaching staff] Michael [Carrick], Kieran [McKenna], Mick Phelan, Demps [Mark Dempsey], but I think there is a tough job ahead.

“That is my opinion as a fan and as someone who knows the club at the moment. These fans are the best but they [the management team] need time. They need time because this is not going to be from the first day.

“The club will need time, confidence and support. I am sure they will give it but the only thing I ask for them is time because this is not easy.

“There are examples – Liverpool are probably going to win the Champions League but I am leaving this club and they haven’t won one title in five years I have been here. They have done incredible work but the fans have given them time. That’s what this club needs at the moment.”

MUFC hired Solskjaer on the back of a fantastic start as interim manager earlier this season, but since landing the job permanently results have got far worse.

An important transfer window now lies ahead for the club, with Solskjaer surely needing a lot of money to fix the various problems in this squad.