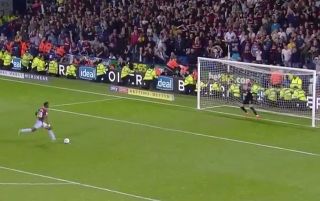 Aston Villa secured their place in the Championship playoffs final at Wembley with a penalty shoot-out win over West Bromwich Albion on Tuesday night.

Villa led 2-1 from the first leg at the weekend, but Craig Dawson’s first-half header drew the Baggies level and eventually forced the tie into extra-time.

Despite being reduced to 10 men, the hosts held on and made it difficult to ensure that it went to penalties, but after Jed Steer’s heroics to save West Brom’s first two penalties, it was down to Tammy Abraham to seal Villa’s place at Wembley.

The Chelsea loanee didn’t disappoint, as he sent his spot-kick into the back of the net to send the away fans behind the goal wild, with Villa now set to face either Leeds United or Derby County for a place in the Premier League next season.

Given the resilience, desire and hunger that they’ve shown in the latter stages of the campaign, few would go against them getting that last win to put the heartbreak of losing in the final to Fulham last year behind them.

Nevertheless, it promises to be a tough encounter, with Abraham undoubtedly set to be key again as he has shown great composure over the last two games to help seal their spot in the final.

?? Tammy Abraham the hero for #AVFC

Villa are heading to Wembley for the play-off final for the second successive season.