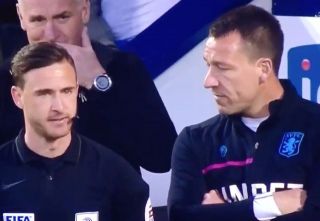 Aston Villa fell behind at the Hawthorns as West Bromwich Albion levelled their Championship playoffs semi-final tie in the second leg on Tuesday night.

Craig Dawson broke the deadlock for the hosts, who trailed 2-1 from the first leg at Villa Park at the weekend which in turn leaves the tie finely poised heading into the second half.

There were several contentious incidents though with tension high and tempers flaring at times, and after warning Villa boss Dean Smith, the fourth official then got into an exchange with his assistant John Terry.

As seen in the video below, the official can be seen insisting that he isn’t interested in what Terry has to say to him, while the former Chelsea defender looks less than impressed that he puts his hand on him and is so dismissive.

The 38-year-old is also warned about being sent away from the dug out before the situation seemingly calms down, but Villa will need to regroup and try to regain their lead in the second half and put the decisions that have gone against them behind them.