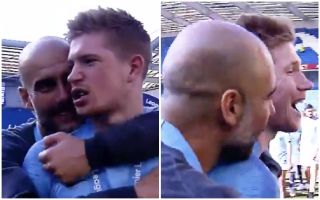 Man City clinched back-to-back Premier League titles on Sunday, and Kevin de Bruyne had a cheeky swipe at Pep Guardiola amid the celebrations.

As noted by the Daily Mail, the Spaniard has previously insisted, perhaps sarcastically, that he was lucky to win what he won during his time at Barcelona due to the quality of the squad at his disposal at the Nou Camp.

He has since followed that up with multiple Bundesliga and Premier League titles, but he has yet to win the Champions League since leaving the Catalan giants.

That won’t matter too much to Man City as they hope to secure a domestic treble this weekend when they face Watford in the FA Cup final, having clinched another league trophy on Sunday with their win over Brighton keeping them ahead of rivals Liverpool.

As seen in the clip below, De Bruyne had a cheeky dig at the criticism that Guardiola seemingly faces, as he jokes: “You’re a s*** coach. You only win”.

Guardiola doesn’t appear to hear him at first, but naturally the pair will be delighted to secure another trophy, and they will hope to continue to lift more in the coming years as Man City appear to be going from strength to strength.

Few can surely doubt Guardiola’s pedigree and qualities as a coach as his record speaks for itself regardless of whether or not he’s had money to spend and world-class players at his disposal. He must still get them to perform consistently, and he has certainly done that to achieve the success he has secured.