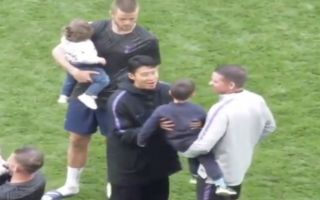 When Tottenham players brought their kids onto the pitch during a final day lap of honour, Son Heung-min took it upon himself to play the babysitter.

Spurs wrapped up their 2018-19 Premier League campaign with a 2-2 draw at home to Everton, securing fourth place and Champions League football for another year.

They have managed to reach the final of Europe’s elite competition this season, with a huge all English encounter against Liverpool to look forward to in Madrid on June 1 and the players were in jubilant mood after their latest fixture.

Son would surely have won uncle of the year for his heartwarming contribution to the on-field celebrations on Sunday, as he went around making a fuss of the kids as his team-mates paraded around the pitch with their families.

The South Korean has been fantastic for Spurs over the last 12 months and is obviously a well-loved figure in the dressing room, as you can see below via Twitter.

I’ve found it. The best video to ever exist? pic.twitter.com/XLW2Dyarjy

We wish Son Heung-min was our uncle.pic.twitter.com/HHNDHDBrJ1