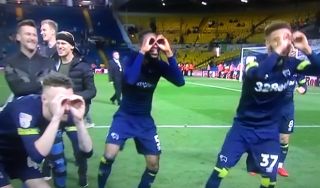 A few Derby County players could be seen making binocular gestures in an attempt to troll Leeds United after their 4-2 playoff victory tonight.

Frank Lampard’s side came from behind to win a thrilling contest at Elland Road and book their place to take on Aston Villa in the Championship playoff final later this month.

Earlier this season it was notably reported by BBC Sport and others that Leeds manager Marcelo Bielsa had a member of staff spy on a Derby training session ahead of one of their games.

This obviously did not go down too well, and Derby players took the opportunity to enjoy rubbing it in Leeds’ faces with their celebrations tonight, with some pictures also available below:

Yep. They went there. pic.twitter.com/rQvxJUX35X

Derby players enjoying this one pic.twitter.com/MbcEIsdv7b