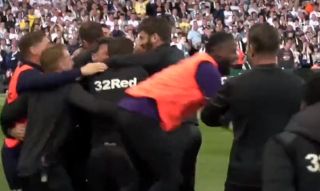 Derby County have gone 4-2 up late on against Leeds United and are now surely heading to Wembley for the playoff final against Aston Villa.

Super-sub Jack Marriott has his second goal of the game to complete a stunning turnaround at Elland Road, with Leeds having previously led 2-0 on aggregate.

Marcelo Bielsa’s side won the first leg of this tie away from home but have capitulated this evening as Frank Lampard’s side will now surely have the chance to fight for Premier League promotion on the 27th of May.

Watch the goal video above as Derby punish Leeds with a well-worked team goal finished off superbly by Marriott.