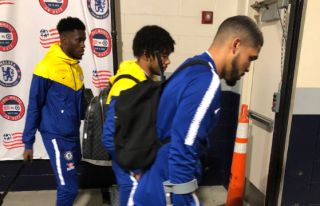 This could be bad news for the Blues ahead of the Europa League final against Arsenal on May 29th, with the club perhaps taking a bit of a risk scheduling in a friendly so soon after the end of the Premier League season.

Ruben Loftus-Cheek on crutches after suffering a leg injury in Chelsea’s match vs. the New England Revolution tonight. #cfc pic.twitter.com/okxLi2XgL6

It remains to be seen how serious this is, but Chelsea fans won’t be at all pleased to see Loftus-Cheek looking like he’s struggling to walk.

The England international has impressed when used this season and could be key in helping the club beat rivals Arsenal in the Europa League final in Baku.

UPDATE: It does look like bad news for Chelsea…

According to the Evening Standard, CFC fear Loftus-Cheek now faces months out with a ruptured Achilles tendon.