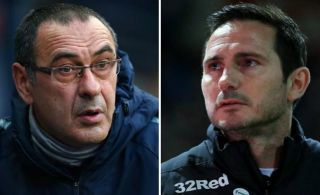 Chelsea will reportedly decide on the future of manager Maurizio Sarri after the Europa League final against Arsenal.

It could well be that the Italian tactician’s future hinges on that game, with the Blues taking on the Gunners in Baku on May 29th.

Although Chelsea do not need the win as much as Arsenal due to having already qualified for the Champions League by finishing third in the Premier League, it has not been a convincing first season from Sarri at Stamford Bridge.

The Telegraph claim a defeat to Arsenal could seal his fate, with the former Napoli boss himself also said to be fearful of the sack.

There does seem to be growing talk of Chelsea looking to axe Sarri, with Italian outlet Sports Mediaset claiming they have already made plans to hire Derby County boss and club legend Frank Lampard as his replacement.

This would be something of a shock given the former England international’s lack of experience, though he has had a strong first season in management with Derby, reaching the Championship playoff final yesterday evening.