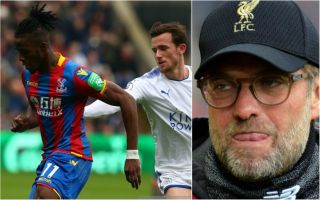 According to the Mail, the £80million-rated Ivory Coast international has informed club chairman Steve Parish of his desire to leave Selhurst Park this summer and join a club playing in the Champions League.

And unlike other potential suitors, such as Arsenal, according to football.london, LFC could actually offer Zaha that, meaning the move could be perfect for both parties.

The Reds could do with more options in attack after a slight dip in form from Mohamed Salah for a large chunk of the 2018/19 season, with Jurgen Klopp not having much in the way of backup.

Zaha seems an ideal fit for Liverpool’s style of play under Klopp, and it’s fair to say these fans think today’s news means their club should be in the running for the 26-year-old’s signature this summer.

Ive said it all year. He would flourish under Klopp

TAA struggles against him every time. Really good player.

Zaha would be perfect for liverpool and klopp perfect for him. He could grow into the club off the bench or rotating liel klopp does with new signings#LFC

I’d have Zaha at Liverpool without doubt.

Personally think Zaha would be a quality signing for Liverpool. Can play anywhere in that front 3! https://t.co/TEItcvEbwZ

I’ve said this before, but I would love to see Wilfred Zaha at Liverpool. He’s such an underrated player, and is too tricky on the ball. We need a fast, tricky attacker like him.

Zaha wants out at Palace to play Champions League football. Cracking player, would love him at Liverpool. I think he would fit right in! #LFC #YNWA @wilfriedzaha ?????