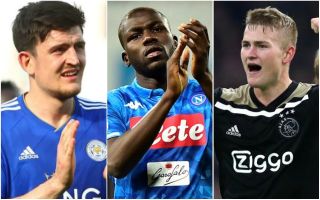 Manchester United manager Ole Gunnar Solskjaer is reportedly ready to take a major risk in the summer transfer window and not prioritise the signing of a new centre-back.

However, according to the Metro, United may not end up signing any of them due to them either being too expensive or unavailable, with Solskjaer instead keen to focus on bringing in a new right-back, left-back, right winger and central midfielder.

This seems incredibly risky by Man Utd, who have relied for too long on players like Chris Smalling, Phil Jones and Eric Bailly, none of whom really look good enough.

Liverpool have shown the value in splashing out on an ideal centre-back signing, with the club benefiting hugely from the arrival of Virgil van Dijk from Southampton midway through last season.

Kalidou Koulibaly would make a fine signing for Manchester United

Any one of Koulibaly, Varane, De Ligt or Maguire would surely improve this MUFC squad, so fans will surely be hoping Solskjaer comes to his senses and doesn’t rely on his current crop of central defenders for another season.

United ended up conceding 54 goals in the league – their worst tally in the PL era, as noted in the tweet below when they beat their previous record of 45…

Manchester United have conceded 46 goals in a Premier League season for the first time ever. #mufc