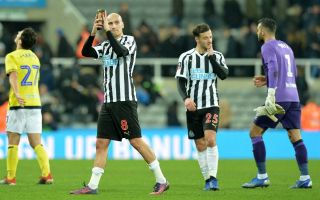 West Ham are reportedly confident they can complete the transfer of Newcastle midfielder Jonjo Shelvey as he faces an uncertain future at his current club.

The 27-year-old has long looked a top talent in the Premier League, though he’s found himself increasingly on the fringes of Rafael Benitez’s plans at St James’ Park in the second half of the season just gone.

Shelvey could surely play week in, week out for most mid-table clubs, and it seems he is now set to get a tempting offer.

According to the Sun, the former Liverpool midfielder is a boyhood West Ham fan and is now being targeted by the east London outfit ahead of this summer.

Shelvey could be just what Manuel Pellegrini’s side need in the middle of the park to give them more options and quality in their bid to climb the table next season.

In truth, it feels like Newcastle would be mad to let him go, and the Sun suggest he could still sign a new contract with the club.

However, he would want more assurances over his role in the side before putting pen to paper, leading to West Ham seemingly being confident they can lure him away, according to the Sun.