The Red Devils are planning for a squad overhaul after a season of misery at Old Trafford, which has seen the club miss out on a place in next year’s Champions League.

Ole Gunnar Solskjaer’s side finished sixth in the Premier League and missed out on silverware after a disastrous last three months of the campaign which saw them win two out of 12 matches across all competitions.

A number of transfer targets have already been mooted with the window now officially open, but the Norwegian boss is aiming to implement a new policy which sees younger, home-grown talent recruited over marquee names.

As a result, Newcastle star Longstaff has emerged as a shock target for Man United, who has only featured in nine Premier League matches this term – as Sky Sports reports.

The 21-year-old is still very much raw talent and not yet a fully established member of Rafa Benitez’s starting XI, but he has been tipped for a bright future.

Longstaff signed a new contract with the Magpies in December, which ties him to St James’ Park until 2022 and it is understood the club does not wish to sell a prized asset this summer.

If United do decide to launch a surprise bid for the young Englishman, Newcastle’s resolve could be tested, but there has been no contact between the two clubs yet – as per Sky Sports. 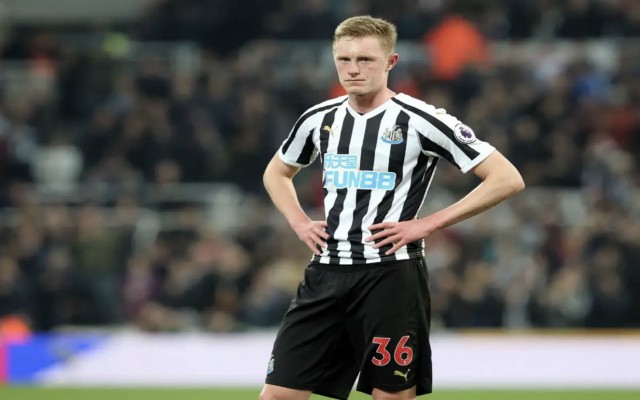 Sean Longstaff in action for Newcastle

Manchester City boss Pep Guardiola singled out Longstaff for praise after his side were beaten 2-1 by the Magpies at the start of the year and Benitez has backed his charge to earn an England call up over the next few seasons.

The Newcastle ace is certainly a highly-rated prospect, however, a step up to a club the size of United might be a risk at this early stage of his career.

Longstaff can play in a number 10 role or as a holding midfielder and his versatility could help him secure regular minutes at Old Trafford but the competition for places in Solskjaer’s squad will likely be intense.

That being said, this story is definitely one to keep an eye on in the coming weeks and it will certainly be interesting to see if United supporters agree with the club’s new stance on transfers, with an increasing number of unexpected targets popping up.