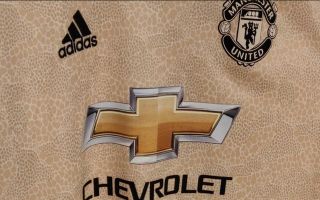 The design of the leaked away kit resembles the pink-coloured shirt from this season, but it looks as though Adidas have really gone to town with next season’s strip by using a snakeskin kind of design on the shirt.

The leaked images show that the detailing (badge, stripes, logo etc.) on the shirt is all black, as expected Chevrolet are once again the main sponsor that will feature on the shirt.

It’s understood that the shirt is currently being sold in retail stores across India, despite the fact that the shirt has been leaked, there is no news of what the shorts or socks of the away kit will look like.

Since the shirt was leaked online, Footy Headlines have also reported the leaked images, this site are extremely accurate when it comes to revealing new kits from some of the world’s biggest clubs.

Check out the bizarre coloured away kit below:

(Leaked) Manchester United’s away kit for the 19/20 season – thoughts? pic.twitter.com/IUVISvaTVE

The kit was first leaked by Dev Bhatia:

United’s decision to release a home kit commemorating the club’s treble-winning triumph of 1999 has already been met with criticism and there’s no doubt that the choice of a flashy gold/brown-coloured away kit will anger some of the club’s fanbase.

At a time when United are in desperate need of going back to the basics and relieving themselves of the big egos that have damaged them in recent seasons, the launch of such a kit seems astounding.