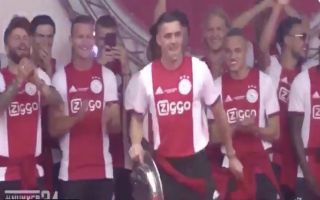 Ajax midfielder Dusan Tadic led title celebrations for Ajax at Amsterdam’s Museumplein on Thursday and was even the subject of a popular chant.

The Dutch giants sealed the Eredivisie crown with a 4-1 win over De Graafschap, which completed a domestic double after a KNVB Cup final triumph earlier in May.

Erik ten Hag’s side were so close to fighting for an unprecedented treble, but a heartbreaking Champions League semi-final defeat to Tottenham ended their stunning journey in this year’s competition.

Ajax have earned plaudits from fans and experts all over the world this season, with a number of new stars emerging on the biggest stage such as Frenkie de Jong, Matthijs de Ligt, David Neres and Hakim Ziyech.

However, ex-Southampton midfielder Dusan Tadic has been arguably the pick of the bunch, contributing 37 goals and 23 assists in 57 appearances across all competitions.

There were extraordinary scenes in Amsterdam yesterday as Ajax supporters and players paid tribute to the midfielder, singing a ‘Tadic on fire’ chant at the top of their lungs at a packed out event.

??Over 100,000 Ajax fans attended their parade today after they won the domestic double for the first time in 17 years. Just listen to this ‘Tadic on fire’ chant.

Unreal scenes. What an atmosphere. ? pic.twitter.com/tbbUKsrjD6

Dusan Tadic making 100 000 Ajax fans and his teammates jump like they are at @ultra is one of the best videos you’ll see all day ?