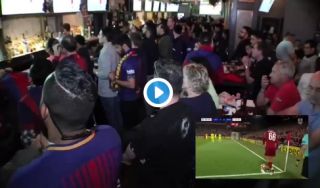 Videos have emerged showing a bar full of Barcelona fans reacting to that stunning capitulation by their team against Liverpool.

The two sides met in the recent Champions League semi-final second leg, with Liverpool beating Barcelona 4-0 at Anfield to overturn a 3-0 deficit from the first match.

The video clips above show the reaction as Liverpool went 2-0 up and then 4-0 up through Divock Origi’s brilliantly-worked goal from Trent Alexander-Arnold’s corner.

It’s quite something to see these supporters’ stunned reactions as LFC produce a memorable Champions League comeback.