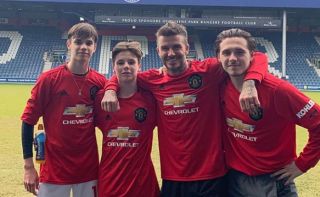 Manchester United legend David Beckham has posed on Instagram with his three sons – all of them sporting the new Man Utd home shirt for next season.

At first this looks innocent enough, with Becks there with Brooklyn, Romeo, and Cruz showing their support for the Red Devils.

Except, take a closer look and you’ll see Romeo is wearing Arsenal shorts – and a number of fans commenting on the post are not too impressed!

United and Arsenal are known for their rivalry, particularly strong during much of Beckham’s time at Old Trafford, so Romeo was never going to get away with this…

“Romeo needs to check his shorts,” said one fan.

“David, can you have a word with Romeo … shorts are not acceptable,” said another.

“Romeo was definitely forced to wear that jersey,” said another, with similar stuff posted throughout the comments section.