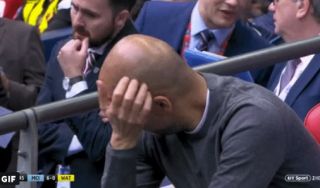 A video below shows the somewhat unusual reaction from Manchester City manager Pep Guardiola as his side made it 6-0 against Watford.

The Premier League champions made it a domestic treble today by beating Watford in the FA Cup final, and it was an absolute thrashing at Wembley.

Pep's reaction to his team going 6-0 up in the #EmiratesFACupFinal to seal a domestic treble ? pic.twitter.com/gITPydgqZ9

So much so that Guardiola seemed almost overwhelmed, or maybe just plain embarrassed on behalf of his opponents, as the sixth goal went in.

It would certainly be interesting to hear what the former Barcelona and Bayern Munich boss has to say about this moment if asked about it later.