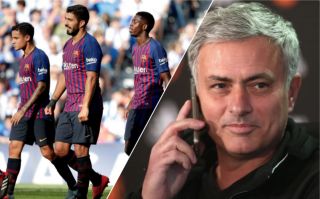 Jose Mourinho looks like he could be set for a return to management with Italian giants Inter Milan, with the Portuguese coach seemingly eager to sign Philippe Coutinho as his first big transfer.

Mourinho has been out of work since being sacked as manager of Man United back in December, however it looks like he could finally be set for a return to management with his old club Inter this summer.

According to Don Balon, Mourinho could be set for a return to football with Inter, with the 56-year-old already looking at transfers in order to get like back at the San Siro off to a flyer.

The report from Don Balon also states that Mourinho has called Barcelona ace Coutinho in regards to a move to the San Siro, with the player himself open to the idea of playing for Inter again should they make him the second highest paid player in Italy after Cristiano Ronaldo.

Mourinho was brilliant during his last spell with Inter Milan, and we’re sure a large part of the club’s fanbase would love to see the Portuguese coach return to the Italian capital this summer.

Mourinho looks like he could return to management with Inter Milan

Coutinho has had a torrid time at Barca these past 12 months, and it seems like the Brazilian could be offered a way out of the Nou Camp by Mourinho this summer.

The Spanish giants are after around €120M if they are to sell Coutinho this summer as per Sport, a price that Inter should think twice about paying given the form the Brazilian’s been in this season.