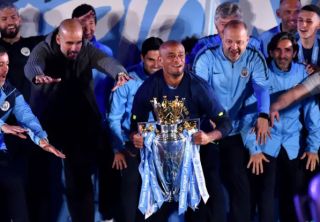 Manchester City have dubbed themselves the Fourmidables after beating Watford in today’s FA Cup final.

The idea presumably being that, after their 6-0 victory at Wembley today, they’re celebrating a quadruple, but only if you include the Community Shield, as they do in their graphic below…

To be honest, a domestic treble of Premier League, FA Cup and Carabao Cup is impressive enough, but we’re not sure anyone’s going to give them that bonus trophy for a one-off game at the start of the season.

Nice try though, City, we’ll see if it catches on.