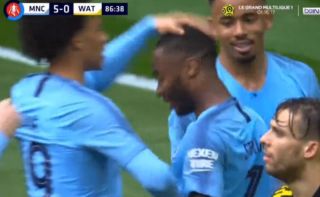 Raheem Sterling has scored yet again for Manchester City as they go 6-0 up in this extremely one-sided FA Cup final against Watford.

Pep Guardiola’s side have been absolutely all over Watford at Wembley this afternoon, and Sterling’s enjoyed himself with a hat-trick.

And in scoring six against the Hornets, City have now become only the third team ever to net that many goals in an FA Cup final.

What a way for City to end the season, adding the FA Cup to the Premier League and Carabao Cup to make it a domestic treble.