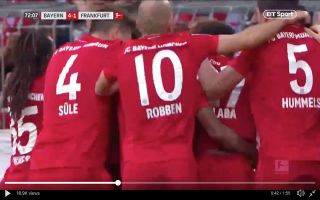 Arjen Robben and Franck Ribery enjoyed a perfect sendoff from Bayern Munich this afternoon, the pair both scored on their final appearance for the Bavarians.

Both Robben and Ribery started the game on the bench, but the pair certainly didn’t waste any time when they had the chance to make sure that they could sign out in style.

In the 72nd minute of the match Ribery scored a fantastic solo goal, it’s no wonder fans call the winger ‘Super Franck’ after seeing this, Ribery showed off some excellent footwork and skill to dance his way into the box before chipping the ball over the goalkeeper.

Ribery went wild during the celebrations.

In the 78th minute of the tie it was Robben’s time to get on the scoresheet, the Dutchman tapped the ball into the back of the net after some excellent work by David Alaba.

Check out the pair’s goals below:

Ribery rolls the years and grabs a brilliant solo goal in his final game! pic.twitter.com/SCg0LwZ5M7

Ribery was booked for taking his shirt off during his celebration, the Frenchman reacted passionately and hugged the referee, what a moment:

He hugged the ref ?

It had to be. #Robbery signing off in style. pic.twitter.com/mWtVvRhT9B

Robben had his own moment of madness after the game, the Dutchman drenched Bayern boss Niko Kovac by pouring a gigantic pint of beer over him, how many people would love to do this to their boss…

Arjen Robben signs off in style.

When you're leaving your job you can drench the boss. pic.twitter.com/N6pMlaCSgh

Robben and Ribery have left a wonderful legacy at Bayern, the pair are two of the club’s greatest ever attackers and they’ve certainly left their mark on the Bundesliga.

123 & 98 – @FranckRibery has scored more #Bundesliga goals than any other player from France (123 goals), while @ArjenRobben is the Dutch top scorer in Bundesliga history (98 goals). Farewell. #FCBSGE @FCBayernEN pic.twitter.com/wHl0Kq2tzg