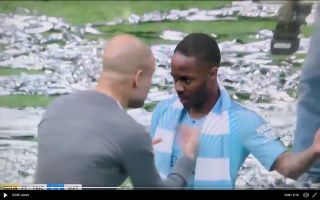 Immediately after City celebrated their victory, Guardiola approached Sterling and began to passionately coach the 24-year-old, it seems that even when his players have a medal in their hands – Guardiola is still keen on ensuring that his players learn from their performance and strive to do better.

Guardiola’s relentless quest for perfection is amazing to see, moments like this really highlight why the Spaniard is one of the best managers to ever grace the dugout.

During his post-match interview with BT Sport, Sterling revealed what it was like to be managed by Guardiola.

Sterling revealed that Pep made his team aware that his goal this season was to retain the Premier League title:

“The first thing when we came in from the World Cup for pre-season was mentality, straight on it again to try and retain the Premier League.”

Check out Pep passionately laying into Sterling after the game below:

This sums Pep Guardiola up ?

And he still gets a passionate lecture from his boss. Relentless pursuit of excellence. pic.twitter.com/shKIOIAjie

Sterling has been phenomenal for City since Pep Guardiola took charge of the Manchester outfit, reaping the rewards that come with working under the Spaniard has allowed Sterling to establish himself as one of the best players in the Premier League.