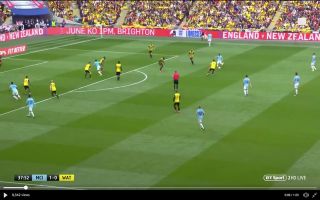 Manchester City have doubled their lead against Watford in today’s FA Cup Final, England international Raheem Sterling tapped the ball into the net after a wonderful team move.

In the 38th minute of the tie, City superstar Bernardo Silva played an inch-perfect pass over Watford’s defence into the path of Gabriel Jesus, the Brazilian looked as though he’d slotted the ball into the back of the net and cemented himself into the FA Cup history books.

However Sterling had other ideas, the England superstar blasted Jesus’ goal-bound strike over the line, Sterling might have to work extra hard in the second-half in order to provide Jesus with the cup final goal that he deserves.

Oooh Bernardo Silva, that is special ?

A glorious assist for Gabriel Jesus and City are two goals to the good!#EmiratesFACupFinal pic.twitter.com/7VOq97TazC

With a victory today, City will become the first ever mens team in England to complete the domestic treble.