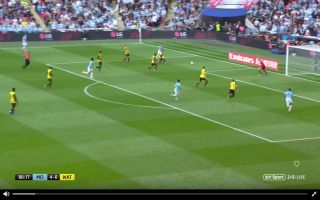 England superstar Raheem Sterling has scored to make it 5-0 to Manchester City in today’s FA Cup Final against Watford, Sterling has netted his second of the game.

City’s Bernardo Silva picked up the ball on the left-wing and charged past Watford’s players like they weren’t even there, the Portuguese star has some of the best close control and dribbling in the entire league.

Silva drilled a low cross into the six-yard box and Sterling rushed forward to smash the ball into the back of the net, Heurelho Gomes managed to get a hand to the strike but there was no way the Brazilian was going to keep this out.

City have been devastating in front of goal today.

Raheem Sterling gets in on the act, City have put Watford to the sword at Wembley!#EmiratesFACup pic.twitter.com/laqYhDXPhk

City have demonstrated just how much better they are than the rest of the Premier League’s teams with their clinical performance today.