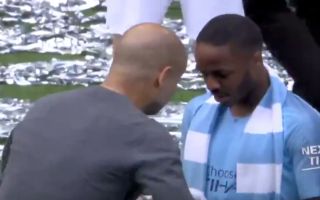 Manchester City won their first FA Cup since 2011 on Saturday, as Pep Guardiola’s side became the first team ever to win all domestic English titles in the same season.

Following the game, Guardiola was caught having a go at Sterling for something that occurred during the game, which came as a surprise considering how well the winger had played against Javi Gracia’s side.

The moment caught a lot of traction on Twitter, with it seemingly looking like Guardiola was criticising Sterling despite him having scored twice in the match.

And after this, it’s been revealed by Sterling as to exactly what Guardiola said to him during his post-match rant following their FA Cup final win yesterday evening.

He just said I shouldnt have tried to steal that first goal … ?? https://t.co/jImYpPV6oj

As confirmed by Sterling on Twitter, Guardiola was merely talking to Sterling about him trying to steal Jesus’ first goal of the game.

In fairness to Guardiola, Jesus’ strike was already going in, and Sterling didn’t need to do anything to ensure the ball was going to end up in the back of the net.

However, despite all this, it was a great day all-round for Man City, who made English football history following their thumping of Watford at Wembley.

We don’t know about you, but we can’t wait to see how this City side fair next season given this successes this year. Roll on next season!