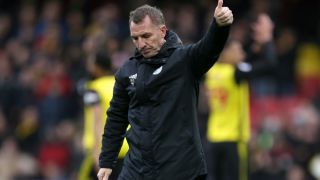 Leicester City have reportedly seen their attempts to snap up Hastings youngster Jamie Fielding fail as he’s set to join Stevenage instead.

Brendan Rodgers enjoyed an impressive start to life at the King Power Stadium in the back end of last season, and he’ll hope to build on that in the next campaign.

In order to do so, he’ll hope to have the backing of the hierarchy to improve the squad with new signings which in turn will allow him to stamp his mark on the team with new faces who fit his style of play and ideas moving forward.

According to TeamTalk though, one player who won’t be arriving any time soon is Fielding, who has reportedly turned down the possibility of a move to Leicester to join League Two outfit Stevenage instead.

On one hand, the 19-year-old could arguably be commended for his decision as it would appear as though he is prioritising regular playing time over the likelihood of going through the youth ranks and sitting on the bench with the Foxes which could stunt his progression and development.

Nevertheless, with Rodgers at the helm and his reputation for developing younger players, it could have been an ideal move for Fielding to try and make his mark at the top level.

However, Leicester will now likely move on to other targets this summer as they’ll hope to build on their finish to the campaign just gone and continue to make progress under Rodgers.