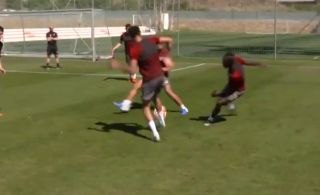 The Premier League season may be over, but Liverpool and Tottenham still have the small matter of the Champions League final in eleven days’ time.

The Reds are already in Spain to prepare for the big game in Madrid, with their players certainly looking sharp and competitive in this clip below.

While some Liverpool players can be seen competing in a rondo, goalkeeper Alisson is being put through his paces with some shots at his goal.

LFC will be desperate to ensure they finally pick up a trophy under Jurgen Klopp after so much progress in recent seasons with so little to show for it so far.