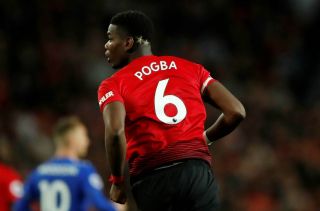 Manchester United are reportedly in talks over a transfer swoop for Atletico Madrid midfielder Thomas Partey as their replacement for Paul Pogba.

According to Don Balon, the Red Devils are keen to keep hold of Pogba despite his desire to leave for Real Madrid, but are therefore working on signing a replacement in midfield anyway.

The France international has not been the most reliable performer in his time at Old Trafford, and Partey arguably looks more of an all-rounder who’d make a better fit in Ole Gunnar Solskjaer’s side.

The Ghana international has been superb in his time with Atletico, and it makes sense that Man Utd are interested given that Don Balon claim he could move for as little as €60million.

As the report explains, that means United could in theory sell Pogba and replace him with Partey whilst making a pretty healthy profit.

This seems like sensible business by MUFC if they can pull it off, though some fans will undoubtedly be unhappy to see such a big name leave Old Trafford.

Pogba is far from perfect, but he’s shown glimpses of real potential with United, whilst also shining in better teams such as Juventus and France, suggesting he could improve his displays in the Premier League with better players around him.